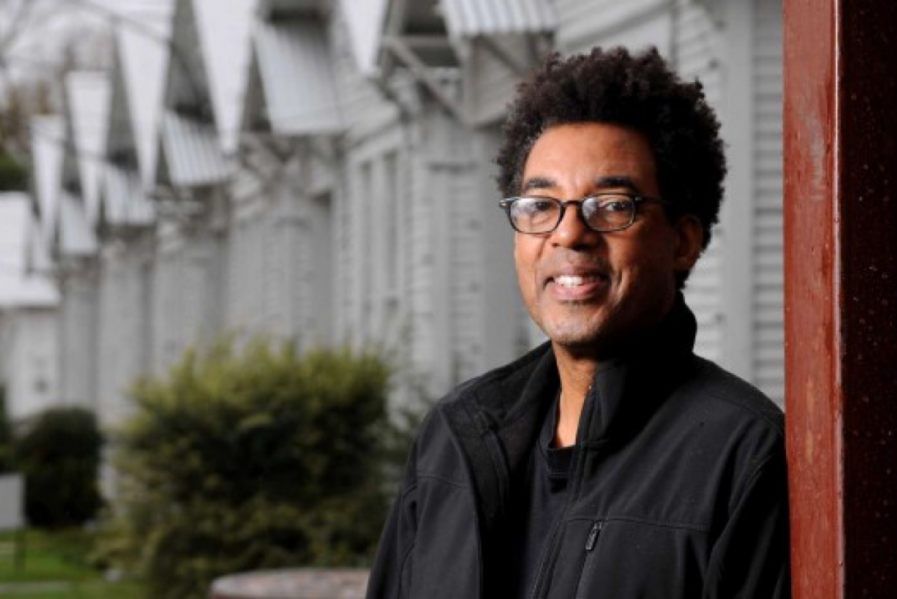 Artist Rick Lowe was just back from a 10-day residency at the University of California-Berkeley. He had turned down an offer to teach for a semester at Stanford University and accepted an invitation from Auburn University to be a visiting scholar next spring. Two other universities outside Houston were wooing him with offers of longer-term academic positions.

It had been less than four months since Lowe received a MacArthur Foundation Fellowship for his work in “social practice,” an art form he helped pioneer 20 years ago with Project Row Houses in the Third Ward, now a national model for how art can revitalize a community.

Lowe is accustomed to accolades, but the Mac-Arthur nod, commonly called a genius grant, is life-changing. Along with a $625,000 award, it has brought an avalanche of offers, from academic posts to project commissions.

So on a night in early December, as the champagne flowed in his honor in upscale West University Place, Lowe saw a moment to seize. The mayor was co-hosting a party for him at the home of collectors Lester and Penelope Marks. Among the influential guests were University of Houston chancellor Renu Khator, Rice University president David Leebron, and Gary Tin­terow, director of the Museum of Fine Arts, Houston.

Lowe said he didn’t want to go anywhere else, unlike all 10 previous Texans who have won Mac-Arthur awards. But it’s going to take some work to keep him here, and he laid out his demands.

Geniuses can be this audacious.

Doesn’t have to be large-scale

To make Project Row Houses an even more indispensable Houston institution, Lowe wants to partner with a local university to create an institute; build a small museum on the Project Row Houses campus; and incubate small businesses that could help the neighborhood retain its historical African-American character.

“I’m going to have to rely on all of you to come on this journey with me and help me do this work,” he said.

Project Row Houses can’t be crated and shipped off like a monumental sculpture, but across the nation community leaders want Lowe to explain how they can emulate it. “I would much rather have people come here. Why don’t we have a mechanism for them to come to our city?” he said.

Menil Collection director Josef Helfenstein, who was at the reception, has heard some of Lowe’s plans before but has rarely seen them expressed so explicitly.

“I’m glad we were all there,” Helfenstein said. “Leaders in other cities ask for his advice all the time. Not enough of that has happened in Houston.”

When the Menil hired Helfenstein about decade ago, Project Row Houses was one of the first cultural spaces he toured. He saw evidence there that art didn’t have to be large-scale to accomplish big things, he said.

Sitting on the yellow bench outside the project’s offices two weeks after the party, Lowe felt good about the future. He likes to say he’s not a strategic thinker; he takes opportunities as they come.

All around him was evidence of that: The project’s original seven shotgun houses, where several rounds of experimental art are created each year, are part of a six-block campus with 71 structures that hold a residential program for young single mothers, after-school classes for neighborhood children, experimental housing for visiting artists, the Eldorado Ballroom and new housing for neighbors with low incomes, built through the project’s community development corporation.

Before the genius grant came, Lowe might have been a little complacent about it all.

“There are points in time that allow you to see yourself differently,” he said. “As I started listening to all the inquiries from people outside of town, my value just went up. It’s like, wait a minute: I need to re-engage. I intend to stay in Houston; this is my home. I love it here. But I’ve got to be able to generate the kind of support that is on the same level that’s being offered from other places.”

He repeated a politically savvy line from the reception: “It’s not just for Project Row Houses, it’s not just for me; it’s for the city and the other institutions that can connect with us.”

He’d already met with Helfenstein to talk about ways the Menil and Project Row Houses might partner.

Helfenstein has invited others into the conversation and says it’s about more than just facilitating Lowe’s dream. The museum has used its current Gandhi exhibit to build relationships outside the Menil, Helfenstein explained, and they’re looking for significant ways to engage the community.

Project Row Houses owns a perfectly situated property for a small museum next to the Eldorado Ballroom. It’s also across the street from Emancipation Park, which is undergoing a $33 million redevelopment with public and private funds. Lowe expects the park’s new community center, recreation center and swimming pool to attract more “mainstream” people to the neighborhood.

“People want to be able to go and see work in a gallery or museum that’s traditional, and we don’t offer that,” he said.

‘The value of artists’

If Lowe had to prioritize his wish list, the Project Row Houses Institute would be at the top. “That gets us right to the point of being able to continue to invest in our belief in the value of artists in addressing community issues,” he said. Social practice is still a new field, the artist pointed out, and it requires education. “People are trying to figure out how to do this practice.”

Lowe wants to bring a half-dozen or so scholars to Houston each year to work with and learn from Project Row Houses. A fellowship program could position a university as a leader in the field, he reasons.

Khator and others at UH often talk about embracing the community around the university’s campus, and Project Row Houses is a neighbor. Lowe already has a relationship with the Rice Building Workshop, which has designed homes on Project Row Houses’ campus, “but we haven’t quite figured out how to leverage that within the context of social practice,” Lowe said.

The third element of his plan, nurturing small businesses, is likely to happen first. Project Row Houses has already incubated a food co-op, New Waters, and an online radio station, All Real Radio.

Lowe implemented a similar project successfully last year in Dallas for a Nasher Sculpture Center-commissioned project in a transitional neighborhood.

They haven’t formalized a plan, and the league couldn’t fund the kiosks themselves, Robinson said, “but we could help make them sustainable, so they’re not just willy-nilly.”

Lowe and Project Rowe Houses’ public art director, Ryan Dennis, already have a title for next fall’s art installations, which they’ll use to promote the initiative: “Small Business, Big Change.”

Cultural tourism could be a good mechanism for preserving African-American history in the area, Robinson added. Houston has already lost that opportunity in the area once known as Freedmen’s Town, just west of downtown.

“It used to be an area we could talk about, but it’s slowly dissolved. That’s sad, because it could have been seen as a jewel and an asset,” Robinson said.

Project Row Houses has revived some of the Third Ward’s spirit, but as the city rapidly redevelops around it, bigger forces are bringing faster, more generic change.

Houston Arts Alliance president and CEO Jonathon Glus wouldn’t be surprised to see Project Row Houses’ scope expand to other areas of the city in the next 20 years.

“They provide community services that will continue to be needed,” Glus said, noting the project’s stabilizing influence. “On an individual level, Project Row Houses has saved lives. If you spend an afternoon there, you’ll see a lot of people whose lives at one time really needed structure and a sense of community.”

It has also nurtured important artists such as Robert Pruitt, Glus said.

He appreciates Lowe’s constancy. “For so many years, he’s been raising the bar aesthetically and challenging the art community,” Glus said. “He’s done it with a level of sophistication and grace that has allowed him to step into a leadership position here and nationally.”

Last week, Lowe was in New York, where he’s been commissioned by the New York Department of Cultural Affairs and the Museum of Modern Art’s PS1 space to help revive an old theater in the Rockaway district. 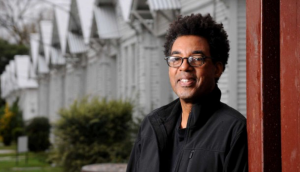 “I think the social practice movement is a very real thing,” he said. “I don’t think it’s a trend or a fad. I think it’s just something that’s been coming for a long time, and it’s here now.”