Although Houston Southeast is steeped in tradition, it is also where the health care history is being made.

The district is home to the world-renowned Texas Medical Center (TMC), which is dedicated to reinventing life sciences to improve the health and wellness of Houston and the world.  TMC is comprised of 59 member institutions that consist of 21 hospitals, 13 support organizations, nine academic and research institutions, six nursing programs, four public health organizations, three medical schools, four universities, two pharmacy schools and a dental school.

Established in 1945, TMC is the largest medical complex in the world. Like the District, it is virtually a city within the city. With more than 50 million developed square feet, it is the eighth-largest business district in the United States, employing more than 100,000 people.

But beyond that, it is where patients from around the globe come for treatment, where babies are welcomed to the world, and where lives are saved:

The Medical Center is also home to three museums that celebrate the human body, the history of medicine, and the state of the heart: The Health Museum, the Wallace D. Wilson Museum at the Texas Heart Institute, and the DeBakey Library and Museum named for Dr. Michael DeBakey, who is widely recognized as the father of modern cardiovascular surgery.

Like all of the District’s neighborhoods, the Texas Medical Center is easily accessible by roads and highways, and conveniently connects to downtown, the Museum District, and NRG Stadium – home of the Houston Texans. 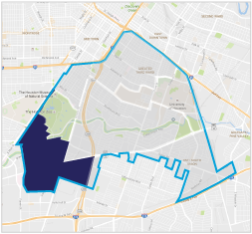