The Museum Park Neighborhood is a compact area of central Houston whose assets, visibility, and proximity to Rice University and the Texas Medical Center have made it one of the inner city’s true treasures. With its historic architecture, oak-shaded streets, street festivals, and internationally known museums and art galleries, it has become a desirable community to live, work, and play.

Each year, more than 8.7 million visitors enjoy the neighborhood’s 19 cultural institutions, which have a roughly $370 million economic impact on the city. This pedestrian-friendly, diverse neighborhood seamlessly connects Houston’s past with its present and future, and its local economy really is local: most businesses are single locations rather than franchises, and the majority of them employ fewer than 25 people.

The Museum Park neighborhood is just minutes from the Medical Center, downtown, and some of the city’s premier shopping destinations. And the area’s convenient light rail system means Houston’s exciting cultural community – theatre, ballet, opera, and music – is just a short ride away.

In 2016, the Livable Centers Study for Museum Park was funded through the Houston-Galveston Area Council (H-GAC) in partnership with the Museum Park Super Neighborhood and the Greater Southeast Management District (Houston Southeast).  The Study is designed to address projected growth for the Houston-Galveston region, develop character standards, and the related urban planning issues       associated with population increase. The goal of a Livable Center Study is to propose implementable ideas that create or further enhance communities people perceive as safe, convenient and desirable. To review the study, visit the link.

Reflecting all of this, Museum Park is consistently ranked among the best places to live in Houston and one of the best neighborhoods for families. 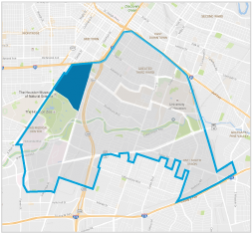